One of the components of the Treaty on Stability, Co-Ordination and Governance that has received a lot of attention from the No side in the Irish referendum is the so-called one-twentieth rule relating to the debt-GDP ratio. Here I want to describe what the rule is and whether it implies additional austerity than Ireland’s existing commitment to a medium-term objective

What is the One-Twentieth Rule?

The rule is mentioned twice in the treaty. The first mention is in the preamble:

RECALLING the obligation for those Contracting Parties whose general government debt exceeds the 60 % reference value to reduce it at an average rate of one twentieth per year as a benchmark;

The second mention is in Article 4

When the ratio of a Contracting Party’s general government debt to gross domestic product exceeds the 60% reference value referred to in Article 1 of the Protocol (No 12) on the excessive deficit procedure, annexed to the European Union Treaties, that Contracting Party shall reduce it at an average rate of one twentieth per year as a benchmark, as provided for in Article 2 of Council Regulation (EC) No 1467/97 of 7 July 1997 on speeding up and clarifying the implementation of the excessive deficit procedure, as amended by Council Regulation (EU) No 1177/2011 of 8 November 2011.

Unfortunately, neither of these sections are well worded. The problem is the “reduce it” formulation. In both cases, it looks as though the “it” that needs to be reduced by one-twentieth is the debt to GDP ratio itself. In Ireland’s case with a peak debt ratio projected at 120% such a rule would require a reduction in the debt ratio of 6%. Such a rule would be a new and tighter fiscal requirement than already existed.

In fact, however, the one-twentieth rule is not intended to refer to anything new at all. The mention in the preamble is a “Recalling” mention, i.e. reminding people that a one-twentieth rule already exists. And Article 4 concludes by explaining that the rule is supposed to work in a way that is set out in EU Council Regulation 1177/2011, where the rule is worded as follows:

When it exceeds the reference value, the ratio of the government debt to gross domestic product (GDP) shall be considered sufficiently diminishing and approaching the reference value at a satisfactory pace in accordance with point (b) of Article 126(2) TFEU if the differential with respect to the reference value has decreased over the previous three years at an average rate of one twentieth per year as a benchmark, based on changes over the last three years for which the data is available

So the rule relates to an average rate of reduction over three years of one-twentieth of the gap between the debt ratio and the 60% reference value. In Ireland’s case, this would require an average pace of reduction of about 3 percentage point per year after the debt ratio has peaked. This rule is EU law and will still apply even if Ireland rejects the EU treaty.

Does the Rule Imply Additional Austerity?

The one-twentieth rule has been mentioned repeatedly by No campaigners as a source of additional austerity. For instance, here‘s Terrence McDonough:

Where does this €5 billion a year figure come from? I’m assuming (and am happy to be corrected) that it comes from the following calculation. Our peak debt level will be €200 billion which will imply a debt-GDP ratio of 120%. At current levels of GDP, a debt ratio of 60% would require a level of debt of €100 billion. One-twentieth of the gap between €200 billion and €100 billion is €5 billion.

This “€5 billion a year debt reduction for 20 years” claim has two serious problems with it.

First, the treaty doesn’t make any reference to 20 years and it’s not a complex mathematical point that closing one-twentieth of a prevailing gap does not eliminate that gap in 20 years because the amount of gap being closed gets progressively smaller. So even if nominal GDP remained unchanged at its current level, the debt reduction needed would gradually reduce over time from €5 billion.

Second, and far more importantly, there is literally nobody who expects this rule to be obeyed by reducing debt levels with constant nominal GDP. Even the ECB is committed to having an average inflation rate in the Eurozone of 2% per year, so no nominal GDP growth in Ireland would require continuous ongoing contractions in real GDP of 2% per year.

If this outcome was to come about, the one-twentieth rule would be the least of our problems. In anything close such a scenario, debt sustainability would have to be restored via a major default.

So the rule cannot be thought of in isolation from discussions of potential growth rates of nominal GDP. Seamus Coffey has an excellent post here that discusses this issue. Seamus provides calculations of how much debt can be sustained while complying with the one-twentieth rule. Below is Seamus’s chart illustrating potential debt levels. 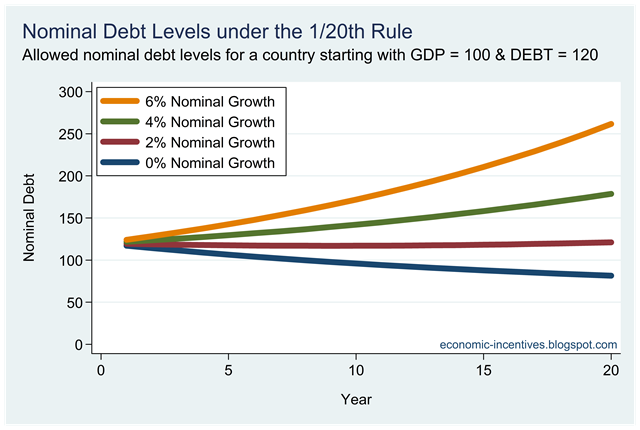 What the chart makes clear is that anything better than 2% per year nominal GDP growth (consistent with zero real GDP growth) will allow the one-twentieth rule to be obeyed without reducing debt levels at all.  The €5 billion a year debt reduction scenario is well off the mark. Either we get some level of real GDP growth, in which case debt can rise, or else we will have to default.

Finally, I did some calculations to check whether the one-twentieth rule was in any way more binding that the commitment to a 0.5% medium-term deficit. The answer is no.

The chart below assumes 4% nominal GDP growth (2% real and 2% nominal).  It shows that the debt ratio will fall much faster with a 0.5% deficit (the blue line) than it would be if we were sticking to the 1/20th rule (the black line).

So the one-twentieth rule already exists and will still apply to us even if we vote No, it doesn’t imply the need to reduce debt by €5 billion per year and in fact is likely to require less austerity than is required by the commitment to reach a medium-term objective of a 0.5% deficit, which we are still required to meet if we vote No.